Is bamboo a grass or a tree?

Disclaimer This page may include affiliate links to Amazon and other partners. OPF Holding, LLC is a participant in the Amazon Services LLC Associates Program, an affiliate advertising program designed to provide a means for sites to earn advertising fees by advertising and linking to Amazon products.
73shares

Bamboo is one of nature’s most intriguing plants. Have you ever wondered if bamboo is a grass or a tree?

Surprisingly, bamboo is really one of the fastest developing genuine grasses of its class! Bamboo belongs to the Poaceae or Gramineae family – which is also known as grasses. But how can it be that a plant as tall as bamboo is still considered grass and not tree? Keep on reading for more details!

Imagine a thousand species worldwide and its huge diversity of sizes, growth behaviors, and natural choices. They increase three times faster than eucalyptus trees and reach maturity in just three years. It is a self-regenerating where brand-new shoots (young stems) emerge yearly. It can be collected after every couple of years for up to four decades.

Bamboo is often mistakenly considered as wood merchandise because of its hardness and sturdiness. But in reality, it is grass which is always mistaken as a tree as well. It has become a stylish favorite of the eco-friendly construction campaign, with a comprehensive diversity of furniture, flooring and other things being built from this tough, fast-growing grass. Even taxonomists around the globe have identified bamboo as grass.

Bamboo has an invasive character just like common weeds and grasses. It is like removing gigantic grasses. One of the hardest challenges in gardening is removing certain species of bamboo. You need to bag a load of perseverance and determination to do it.

However, not every type is invasive. Try to get a clumping species because they become taller rather than expanding outwards. It is remarkably easy to look after and thrives favorably in containers like a classic houseplant.

Pin it for later! 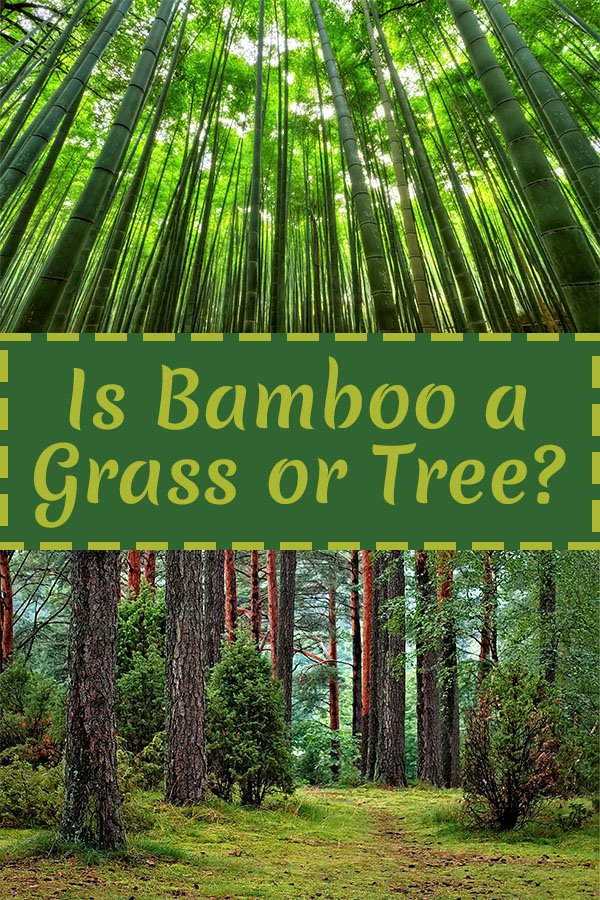 Why people confuse bamboo with trees

Bamboo is oftentimes confused as a tree because it extends about 100ft tall. Some species may even be marketed as bamboo trees but scientifically speaking, bamboo is 100% grass. It is the tallest and largest member of the grass genus. When people picture grass, it is rather the short green plant that we see in gardens and parks.

In addition to this, we often see bamboo used in products like toothbrushes. In these cases, bamboo looks very similar to wood.

Another major distinction is that bamboos do not have bark like trees. What they have are protective leaves surrounding the culm (stems of bamboo) in their prime stages of growth. A single culm will reach its maximum height in just one growing period. It will stay as it is for several years, progressively extending the number of side branches, but they will never grow wider or higher because it doesn’t have secondary growth cambium. Cambium is the tree sapling’s thin trunk that grows wider as the tree increases in height and increases in circumference from the interior layer.

It is a colony plant like grasses. It uses the strength from existing bamboos to produce more and increase the root formation. The new plants will also develop in the same way. Bamboo does not need fertilizers, pesticides or irrigation to improve its growth, instead, it spreads like weeds.

Bamboo grows by elongation not by division. Elongation will happen quicker by mitotic cell division. The tactics of growing by elongation are well-known among grasses. Bamboo plants produce all the cells they require to develop when they are still small buds. These cells are packed with water, which makes them increase suddenly and spread out. This is the reason why grass lawns grow back in just one week after trimming.

When talking about plants, evergreens are plants that are forever green and keep their leaves during winter and fall. Some species of bamboos are labeled as deciduous and semi-deciduous. It means that they totally drop their leaves or drop their leaves for a short span of time.

Bamboos use a unique growth plan than trees. They grow from the ground instead of the top. They are more active in photosynthesis than trees. Trees get tall because they go up against each tree and plants for daylight. Meanwhile, bamboo competes by developing at a faster speed and utilizing rhizomes (underground stems of bamboo) to grow the identical genetic plant horizontally. They will periodically squeeze out trees if they are both planted at the same time and place. Trees can only fight for nourishment if they are already stabilized.

What is the anatomy of bamboo?

Let’s have an in-depth analysis of how bamboo is considered a grass, not a tree.

What is a bamboo culm?

Bamboo has a jointed stem called culms which is the empty stem of a grass. They are generally empty but some have solid culms. The branches are also designed with nodes (noticeable rings on culms)  and internodes (hollow parts between the nodes) which are similar to culms.

What is a bamboo rhizome?

The rhizome is characterized as an underground culm spreading horizontally in the ground. It produces roots and shoots at the nodes. The roots are mostly shallow and do not develop any more than 20 inches. The growth patterns are either clumping or running bamboos.

What is clumping bamboo?

Sympodial or clumping bamboos have Pachymorph rhizomes that spread upwards and grows into a fresh culm. They appear from buds on an actual rhizome and so on and so forth. This widening outcome causes the woods to increase gradually around the boundary. This behavior gives the bamboo the ‘clumping’ characteristic.

What is running bamboo?

Monopodial or running bamboos have Leptomorph rhizomes that spread horizontally beneath the soil. Brand-new shoots and roots appear from the nodes. Most of the buds continue to be dormant but they may mature into a new culm. It may also produce a new rhizome. Each new rhizomes will reach the ground horizontally and create numerous news culms and rhizomes. This particular style gives the bamboo a ‘running’ characteristic and is as the “invasive” type of bamboo.

Here you can find more information about clumping and running bamboo!

How does it grow?

The shooting season for most bamboos takes place throughout the spring season during the early summer. The shoot stretches as it expands into a fresh culm. Further branches and leaves will sprout from the nodes of the current culm. The leaves from adult culms fall and develop new leaves during this entire season as well.

What are the characteristics of bamboo to be considered as grass?

In order to answer this question, we have to dive into the characteristics of grass, also called Poaceae. So let’s have a look at this plant family.

A bract is a modified leaf. It is connected with a reproductive formation like flowers. They are oftentimes different from leaves. They may be smaller, bigger, or of a diverse shade, form, or composition. They may also seem different from some parts of the flower.

Each overlapping bract unites and protects the anticipated fully developed leaf or branch if you will allow it to expand.

On bamboo culms, you will notice the bracts quite easily.

Spikelet formation is very helpful in the classification of grass species and genera, and it describes some extensive collections of grasses. Several bamboos form pseudospikelets by the increase of scalelike formations at the center of the spikelet. They are considered to be leaves decreased to quite little sheaths.

Pseudospikelets are a collection of indefinite, spikelet-like formations that grow from buds. They are attached by glumelike pure bracts. Meanwhile, indeterminate inflorescences are the blossoming flowers found at the top of a stretched axis or at the middle of a trimmed axis.

The floral structure of bamboos is fundamentally comparable to grass. Because of details in the flowers, however, bamboos are thought to be ancient among the grasses. They usually have three lodicules or layers at the center of the ovary, six stamens, and three stigmas or the germination parts of the pistil. Typical grasses have two lodicules, three stamens, and two stigmas. Numerous bamboos flower yearly, some flower only with an interval of a few years. Each of them blooms at the same point and dies after flowering and producing their seeds.

Although it has a woody composition, bamboo is still labeled as grass because it uses a method of photosynthesis called C4. It is basically the kind of photosynthesis executed by every grass. C4 indicates the number of carbon particles present in our food that is produced.

Another major component of a grass leaf is its blade. Grass leaves are shown separately at the nodes with a minor difference. They are arrayed in two upright ranks. So a leaf, and most noticeably its blade, is located right below the blade two nodes over it. Structurally, it indicates that the point of leaf introduction interchanges with each node.

The leaf sheath begins to surround the stem and overlay when the two points meet. Grass leaf blades are normally long and thin, with lateral edges, but seldom are in the form of an oval. The blades may be smaller than one centimeter or less than five meters in the giant bamboos. In grasses of such dry fields like deserts, their leaves may curl up to form long-drawn, delicate tubes.

The tension lies in its solid woody properties and its great size compared to some grass varieties. Bamboo is not wood at all. Bamboo grass can really be stronger than an oak tree depending on its nature and species.

Another characteristic that differentiates bamboo from wood is its amazingly speedy growth rate. It can be harvested in as early as five years compared to other trees which may take decades.

What are the benefits of bamboo? 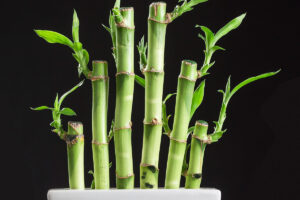 Black Spots on Lucky Bamboo – What to Do? 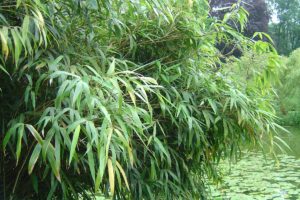 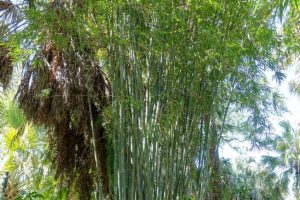 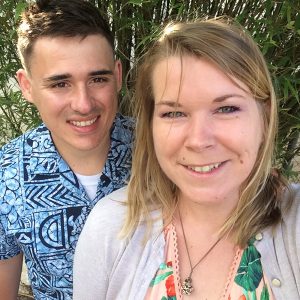 We are James and Natalie – newly-weds & nature lovers!

We want to give you the best information possible on bamboo. Get inspired to grow bamboo or to switch to natural bamboo products! 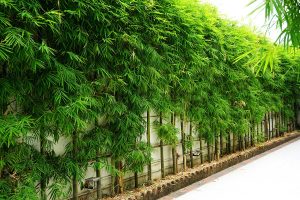 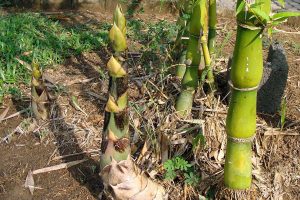 What Bamboo Species Grow the Fastest? 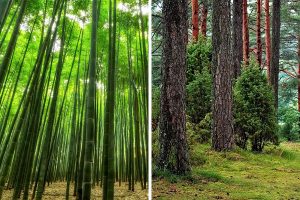 Is bamboo a grass or a tree?