Disclaimer This page may include affiliate links to Amazon and other partners. OPF Holding, LLC is a participant in the Amazon Services LLC Associates Program, an affiliate advertising program designed to provide a means for sites to earn advertising fees by advertising and linking to Amazon products.

This is one of the first things, you’ll come across when reading about bamboo. The distinction between the two main bamboo types is an inevitable part of any species description.

So, what bamboo types are there? While there are over a thousand bamboo species, they can be categorized in two broad types: clumping and running bamboo. This classification isn’t the only way you can categorize bamboo species, though. There are cold-hardy, drought-resistant, short, tall bamboos, and many other sorting options.

Each type of bamboo has its own distinguishing characteristics and family of species. The bamboo type that is best to add to your existing plant family will primarily depend on where you live, the look, and max height/diameter bamboo you prefer, and what you ultimately plan to use the bamboo for.

Clumping vs. Running - What's the difference?

As mentioned above, the two distinct types of bamboo are clumping and running. Each one is named for their unique growing characteristics.

Clumping (sympodial or pachymorph) bamboo grows just as its name suggests – in large clumps of culms (stems). Shoots go straight up from where you initially plant it.
Depending on the species, these plants will only expand a few inches around the primary roots each year. This makes them ideal for pots as well as in-ground.

Because the rhizomes stay put over long periods of time, clumping bamboo owners never have to worry about the plant spreading or becoming uncontainable. Their predictable, non-invasive, and “well-behaved” growing nature makes them an appealing choice for individuals looking for a more low-maintenance bamboo.

However, because clumping bamboo grows in mainly one area, its roots are very dense. It is also quite stubborn in terms of growth direction. If you plan on planting clumping bamboo in natural soil, such as in your backyard, it is recommended that you plant it away from any structures such sidewalks. The strong roots of a clumping bamboo could exert a large amount of pressure when spreading, which could lead to damage.

Running (monopodial or leptomorph) bamboo can spread very quickly, just like weeds. If not monitored, their rhizomes will spread out and grow new shoots across long distances. In fact, its roots can travel as far as 100 feet (30 m)!

Their high speed of growth make this type of bamboo ideal for people who want to quickly create a canopy or privacy screen in the backyard. However, this extreme growth rate also makes them quite demanding to manage.

Those interested in planting a running bamboo plant will need to invest in a root barrier, and be dedicated to providing regular upkeep, to keep the bamboo in check.

Check out all Running Species here!

Although clumping and running bamboo make up the two main categories of bamboo that people will generally use, we cannot forget about the bamboo genera.

Anyone who has taken a basic science class has been exposed to the hierarchy of biological classification. Often you learn it as a rhyme such as, King Phillip came over for good soup. K, P, C, O, F, G, S…. Kingdom, Phylum, Class, Order, Family, Genus, Species.

This, of course, goes from the largest group (kingdom) to the smallest (species).

Bamboo is part of the family Poaceae, which is the true grass family. The sub-family is called Bambusoideae.

Bamboo has 3 main tribes with 123 genera, each has many subtribes and species. There are over 1,600 bamboo species recorded. With this being said, I will not give you a list of all bamboo genera. You can get a good list here.

These are the most common bamboo genera:

The 3 bamboo tribes are:

Check out all bamboo species here!

Obviously, we can also categorize bamboo plants by their height. Tall bamboo types are often used for timber. Some plants are as short as 2-4 inches (5-10 cm), whichis great for groundcovering purposes.

This is how we divide bamboo plants by size:

While researching the best bamboo plant for your needs, you’ll see different height indications. This has to do with the growing conditions. Bamboos in planters and cooler climates generally don’t grow to their maximum height. A good rule of thumb is to divide the max. or average height by 2 in order to see what this plant might become.

You would think that bamboo cannot withstand cold temperatures because it originates from tropical forests. However, there are quite a few hardy and cold-hardy bamboos. They often derive from mountainous regions.

When deciding what type of bamboo species you want to plant, consider the average low temperatures in your area for the past ten years. The bamboo plant you want will be the one that can tolerate temperatures below those averages.

Most bamboo thrives in warmer climates, so you want to be sure the one you end up planting can sustain itself during colder times of the year.

Also consider the average high temperatures in your area during previous years. While bamboo can thrive in warmer temperatures, there are some species of bamboo that can suffer from too much heat or direct sunlight. Typically, these bamboos originate from mountainous climates, where they have eventually evolved to brace the cold, rather than heat.

Hardy bamboo will withstand an averagely cold winter of as low as 5°F (-15°C).

Just because you are living in USDA Zone 5 or similar, it doesn’t mean that bamboo cannot thrive there.

Cold-hardy bamboo will withstand extremely cold temperatures of as low as -20°F (-28°C). 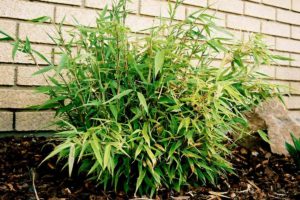 Of course, there are species that prefer warmer climates. Some of them love humidity and some despite it.

When I say “warm climate bamboo”, think USDA Zones 10+. These are the species that cannot do much freezing. They often can handle a cold night or two but not consecutively.

Some of you may be facing long periods of drought. There are a few bamboo species that can withstand the lack of water.

Watering Bamboo: How Much, How Often & When

Ready to introduce a bamboo plant to your home, but still not sure if clumping or running bamboo is best for you? Ask yourself the following questions:

Non-Invasive Bamboo – What Bamboo Does Not Spread?

How to Stop Bamboo From Spreading?

Can I Grow Bamboo in Rocky Soil?

We are James and Natalie – newly-weds & nature lovers!

We want to give you the best information possible on bamboo. Get inspired to grow bamboo or to switch to natural bamboo products!

Non-Invasive Bamboo - What Bamboo Does Not Spread?